Home/Across the Pond
Previous Next

We arrived a little over 24 hours ago to London. As is typically the case with a trip like this for us, we had some little hiccups. We knew this would probably happen, so we did what we could to prepare accordingly. In our case, it was making sure that we had two changes of clothes in our carry-on bags and had enough battery life in our cell phones for any issues in some of the airports on our journey. 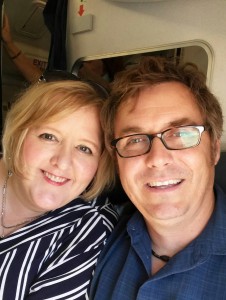 We had a pretty uneventful flight on United from Minneapolis to Chicago (here is a picture).

However, it was when we got to Chicago that things got interesting (I will not offer a picture of us at the end of the day…not too pleasant to look at :)). Our flight arrived on-time, but on-time in this case was already basically late for the connecting flight to Dublin. Candy was able to print off the boarding pass for herself the night before, but the system would not allow her to print mine and asked that I go to the ticketing counter when I got to Chicago to get a ticket printed.

We ended up landing in Terminal 1 at O’Hare and had to run to get the train to Terminal 5 for international flights. I went ahead of Candy so I could get my ticket. When I got to the terminal there was a huge line for security. I added that to my already overloaded memory banks and headed to the Aer Lingus counter. I got there to find it empty…no staff could be found with a sign stating that the counter was closed at 2:50 pm. The only problem was it was 2:45 pm and I asked two workers from other airlines to knock on their doors (they did not want to do this, but pleaded). No one responded, so I went to find Candy in the security line. During this walk, I ran into some Aer Lingus staff members looking for passengers like us. Apparently, I was not the only one with issues printing the boarding pass. They had to find over 25 people in this crazy terminal security line with the same problem. It is in times like this that I am very thankful for my career! We got through security as they gave us a jump in line so we could make the flight.

Our flight across the Atlantic was really nice. Aer Lingus does a great job with customer service and had good food for an airline and a solid entertainment system at each seat. I watched two movies on the trip, as well as did some discussion board posts on my computer. The only issue was the plug for power at my seat did not work properly so my computer died halfway through the flight.

We arrived in Dublin at 5:15 am and went to baggage claim (or reclaim as they say over here). I took a picture that we posted on Facebook but took down because one of my British friends and former RLBC counselors, Martin Bushell, said that I had put together three of the most offensive hand gestures in Europe. I suppose I will just place my hands behind my back for the next two months to stay out of trouble ;). We saw one of our suitcases come off the belt, but there was no sign of the second one with our clothes. We waited a little bit longer, then went to get help from the folks at Aer Lingus. We are still waiting for it, but have been told it will be here this evening (got lost in Chicago).

While we waited in Dublin for our next flight to London, a big hangar fire apparently brought all flights to a standstill, so we were stuck in Dublin for six hours. We did our part to get a bite to eat and find a plug to charge up our phones to check our Facebook and email, as the airport had free wifi. We finally took off on British Airways to Heathrow, but the flight took about 45 minutes longer than normal, as London had a ton of rain. We circled London for about 30 minutes before it was safe to land. Once there, we saw rain that resembled the rain I saw each summer on the Alabama Gulf Coast.

We found a bus to take us to our hotel near Heathrow, the Sheraton Skyline in Hayes. We asked the bus driver how much the bus fare was and he said £5 each. We did not have pounds, just Euros.  So, he then said “€20.” If I was not so tired I would have let him have it…seriously. We got to the hotel, checked in, and slept for six hours. When we woke up, we got room service from the hotel and they sent up a nice complimentary bottle of champagne and chocolate and strawberries to celebrate our 20th anniversary. Candy made sure to let the hotel know that we were celebrating our anniversary when she reserved the room. We are not really into champagne, but the thought was really kind of them. After this, I graded most of the night to catch-up and also get ahead since we will be on the cruise ship on Saturday for a week and wifi will be at a premium. Candy got some much-needed sleep over night.

We are heading into London tomorrow (Friday) to go take a bus tour around the major sites, meet-up with good RLBC friend David Rubin, then take a train to Bishops Stortford to have dinner with another RLBC friend (Martin Bushell). We also hope to see Andrew Bentley and Andrew Davis, two good camp friends, before leaving for the cruise. We will do what we can to take some good shots tomorrow and offer a blog post, as well.

Have a great rest of your day…I suppose we will have some tea (I do not think I have had this much tea in our life!).